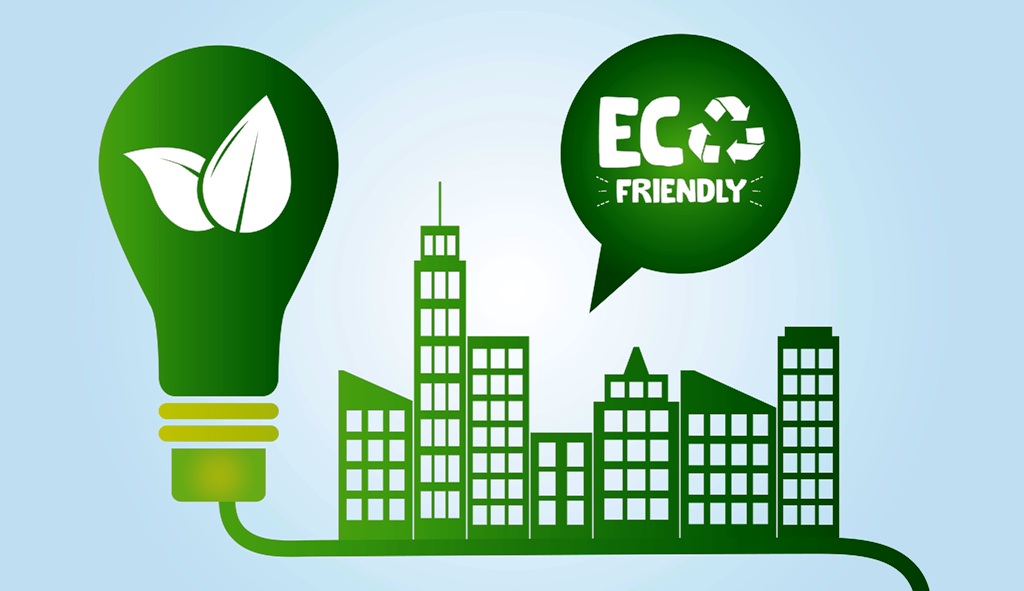 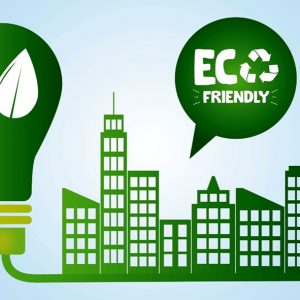 If you own a house or you are renting out in Victoria state, there is a pretty good chance that you must have stumbled upon the Victoria government-sponsored halogen bulbs or CFLs to LED lights replacement scheme.  If you still have not switched to energy-saving LEDs just yet, there must be some compelling reasons.

LED light bulbs are far more superior to halogen bulbs & CFLs, lasting over 10x longer while consuming up to 80% less electricity. To know how many units of electricity you have saved after getting halogens and CFLs replaced with reaplaceable LEDs, install a In-home display unit (offered free under the VEU program) onto your smart meter.

“LEDs are better value for money than incandescent and halogen light bulbs and can be used in the majority of existing fittings. LEDs use about 75% less energy than halogen light bulbs and last 5-10 times longer, greatly reducing replacement costs and the number of light bulbs ending up in a landfill. The up-front cost of LEDs generally has a payback time of less than 1 year. By replacing 10 halogen light bulbs with LEDs, an average household can expect to save around $650 over 10 years on their electricity bill.”

Under the Victorian Energy Upgrades program, the state government is helping Victorian businesses and households cut power bills, save energy, and also reduce greenhouse gas emissions (GHGs) that are responsible for climate change. The government’s VEU rebate scheme provides access to discounted energy-efficient LED products and if you don’t have a solid reason, you should avail the benefits right now. We work with Glow Green Pty Ltd – an Accredited Provider (AP) under the VEU program


Of course, you can have a concern that only years back you upgraded from incandescent globes to CFLs – why LEDs now? This is a valid query that we will try to address in this article.

For a briefer, this change is to do with two things – one, the development and innovations in lighting technology, and two, the benefits of the Victorian Energy Upgrades program.

There is a range of LED downlights being offered by various manufacturers. They come in a variety of designs, colors, and features like dimmable & non-dimmable. While choosing the best LED downlights, you should also consider technical specifications like lumens, color temperature & wattage.

Let’s find out which of the two is a better lighting option for your space.

Power consumption in a house depends on the type of lights used, how often they are switched on and off and the duration they are on for. Consumption can be as high as 80-90%. LED bulbs generally consume between 7-20 watts per hour. 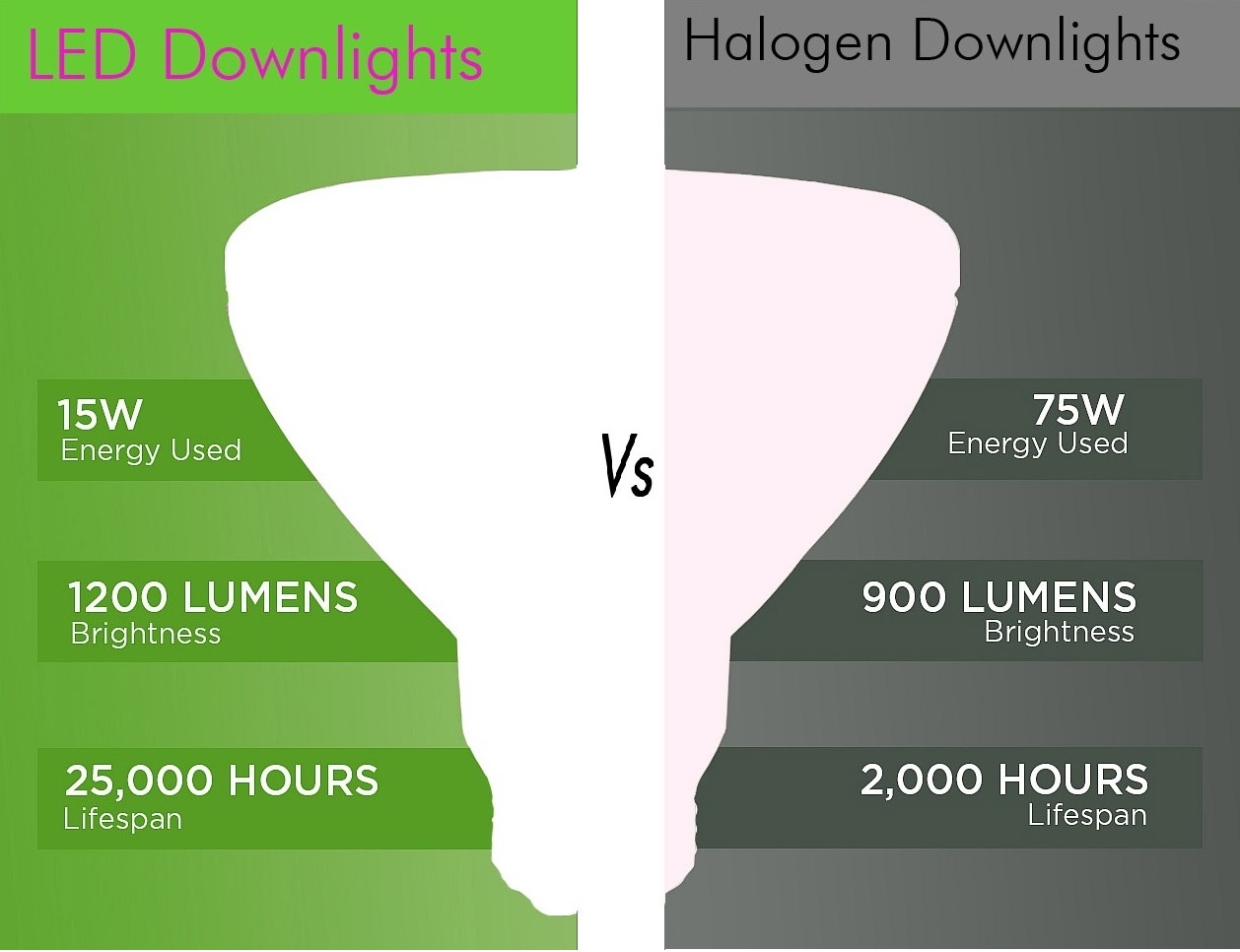 Meanwhile, halogen bulbs use anywhere between 35-500 watts an hour to produce the same amount of light. Halogen bulbs can use up to 10 times more electricity when compared to LED bulbs or downlights.

Replacing your halogen downlights with LED downlights will save a significant amount of energy and you’ll see a considerable drop in your power bills.

Halogen bulbs generally last approximately 1000-2000 hours, which is very short compared to an LED bulb which comes with an average lifespan of up to 50,000 hours. The initial cost of LED downlights maybe 4-5 higher as compared to the halogen lamps, but if you are getting your old lamps replaced under the VEU program, you might be eligible for a FREE* LED upgrade i.e., you don’t have to pay a single penny for upgrading to LED lights.

Quality is another major factor in considering LED downlights. LEDs deliver better light quality at a much lower wattage. Plus they don’t produce any heat, so they are a perfect fit for places like the kitchen because the kitchen is the last place you want more heat. 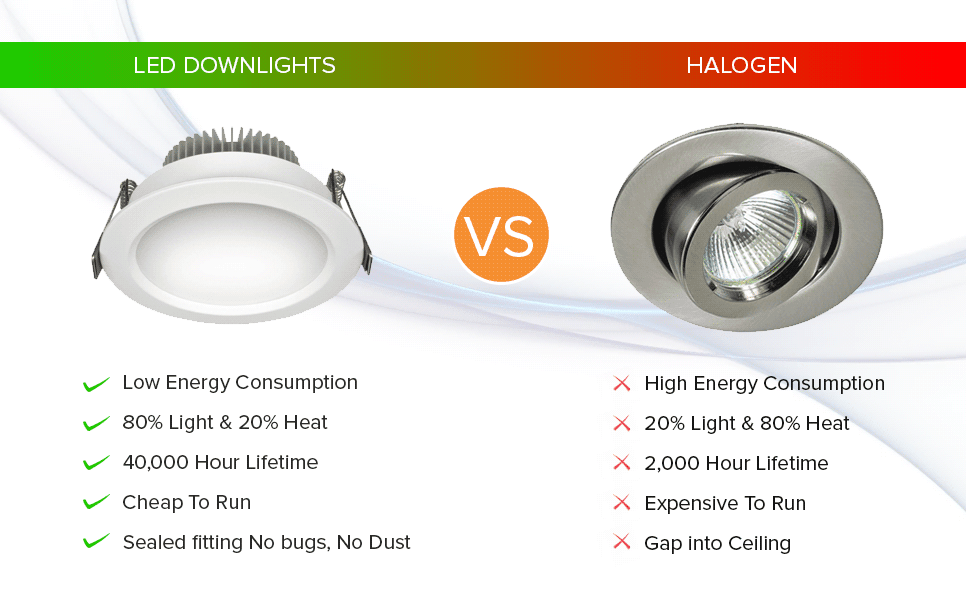 The heat emitted from halogen bulbs not only increases the temperature of a place but also risks household/workplace fire. On the other hand, LEDs stay cool because they don’t have a filament unlike in incandescent and halogen bulbs.

Advantages Of Upgrading CFLs to LEDs 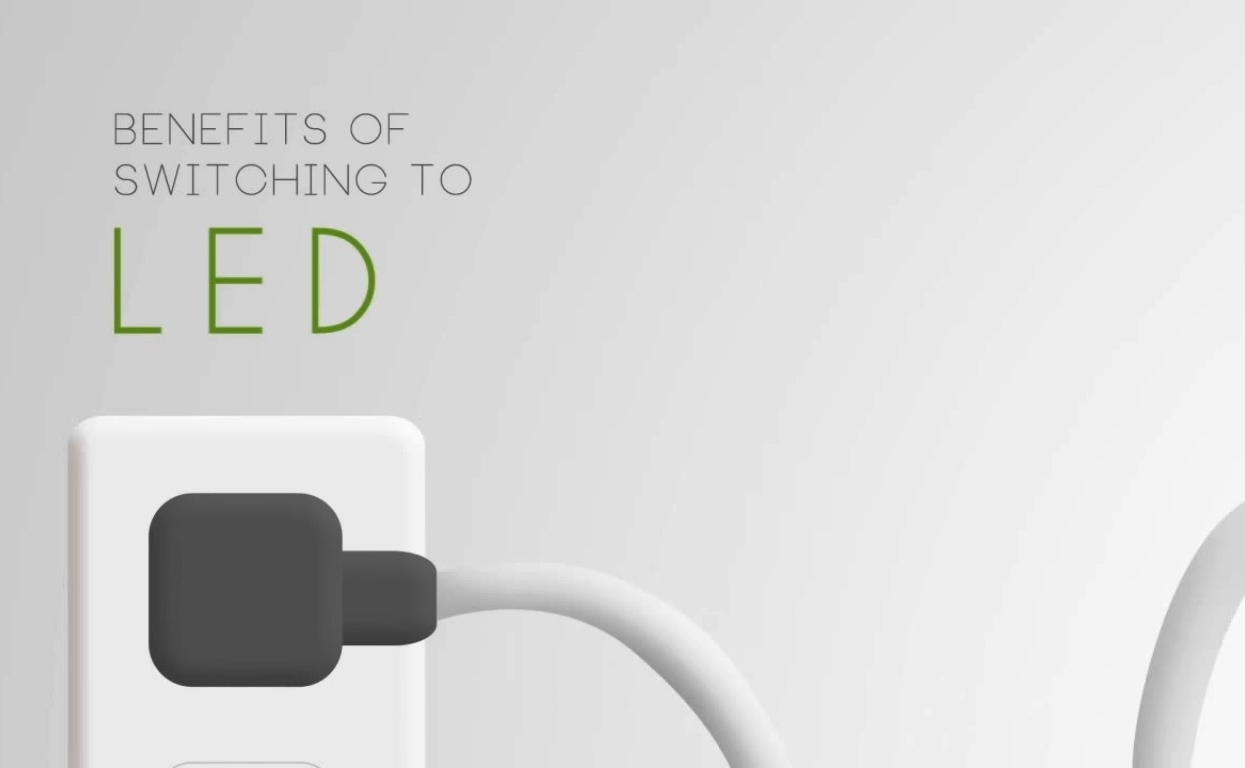 The switch can help you save up to 80% on your energy bills.

By replacing halogen and CFL lights with LEDs, you can immediately start reducing your electricity bills by up to 80%. Since, LEDs consume 75% less energy than traditional light bulbs and do not produce any heat (like CFLs and incandescent do) when lit, which leads to energy loss. LED lights consume very little electricity to produce “better” brightness, leading to lesser power bills. Plus, LEDs run at a cool temperature, meaning almost zero energy is lost as heat.

*Based on 2 hrs/day of usage, and electricity rate of 11 cents per kilowatt-hour, shown in USD. (US Department of Energy

#1 LEDs Lights Have A Long Lifespan

LED lights, after installation, require very little to no maintenance at all, this is primarily because LED lights have a far longer lifespan. CFL lights have a maximum of 15,000 hours, whereas LEDs last up to 50,000 hours. Zero heat emission helps in reducing the risk of fire, making them safer to use.

#2 LEDs Lights Are Easy On The Environment

As mentioned, LEDs consume very little energy in comparison to traditional lights. It’s not just this: some LEDs are made from recyclable materials, which ensure they are easier on the environment and help lower your carbon footprint.

Earlier, during the times of Halogens & LEDs, wattage was used to be the criteria for choosing lights based on brightness levels. That’s no longer the case now. Now lumen output is the sole factor you should be looking at while making a switch from Halogens or CFLs to LED lights. Here is a comparison of Incandescent, CFLs & LEDs based on wattage and corresponding brightness level.

#4 LEDs Lights Are More Appealing To The Eye

LED lights are the latest revolution in the lighting industry, which means that the researchers are spending more time enhancing the performance and raising the aesthetic level. LEDs are more beautiful in design than conventional lights and come with a sleeker and more appealing form factor.

Switching from CFLs to LEDs has become imperative in Victoria because the LED product replacement is done under the VEU scheme free of cost for households and at discounted rates for commercial and industrial setups.

What should I know before buying LED lights?

Make sure your replacement LED fits the lighting fixtures in your home. You can take your old lamp to the shop to compare it against the metal base of the Incandescent/Fluorescent lamp.

Check what fitting you need (Bayonet/Edison screw base) to install the new lights. Compare the size, shape, and voltage of the old and new lights.

In the past, we used to buy lightbulbs based on the watt units which is basically an amount of power required by an appliance/equipment to put into operation. When a buyer is going out for a lightbulb(s), he/she wants to choose a light bulb depending on how much light they provide.

LED bulbs produce the same amount of light — when compared with halogens/CFLs — using far less power. That means it no longer makes sense to shop for watts. Instead, luminous efficacy is the new unit that shops for lights.

Using “lumens” is now the way to choose the light you need. Lumens measure how much light you are getting from a bulb. More lumens mean brighter light; fewer lumens mean dimmer light. Lumens are to light what dozens are to bananas and gallons and Kelvin is to temperature. 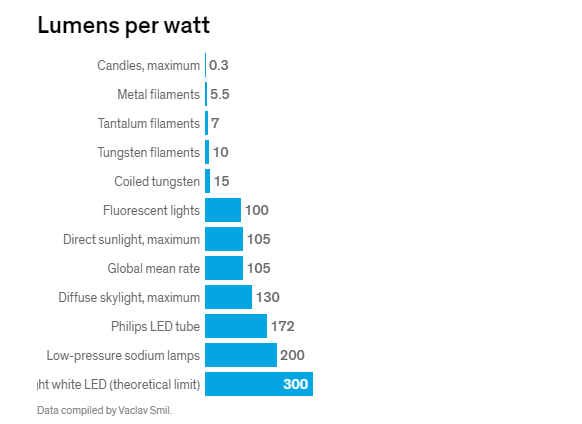 The table below shows the number of lumens (and watts) you should look for in an LED as a replacement for a range of halogen light bulbs.

Lumen values are approximate and do vary between manufacturers.  Data Source: energyrating.gov.au

The Regulatory Compliance Mark (RCM) demonstrates that the product meets the Australian electrical safety and electromagnetic compatibility requirements and should be visible on the package. In addition, the brand must be registered on the Australian Government National Equipment Registration System. Always look for RCM label on the packaging. 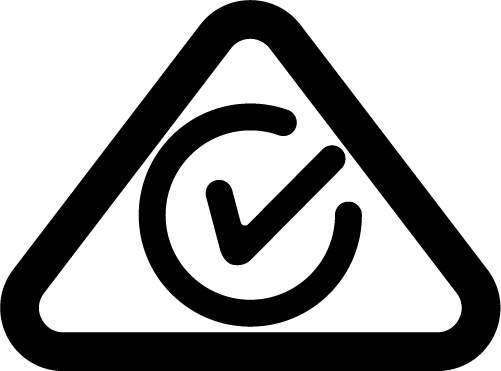 The lifetime of a LED bulb depends on various factors. The type and quality of the semiconductor material and manufacturing process play a vital part in determining the life of a LED bulb. Look for manufacturers that can back up their lifetime claims, either with testing or certification indicated on the product packaging.

Look for a product warranty of at least 2 years for an LED bulb claiming a 15K hour lifetime. The guarantee that a manufacturer is willing to provide is an indicator of gauging & testing product longevity.

Not all LED bulbs are equally efficient.  Look for an energy efficiency rating for lumens per Watt (lm/W) on the bulb and compare it with other products. The higher the number, the more efficient the product.

Sometimes efficiency is not marked on the package. In such cases, you can simply divide the lumens ratings by the number of Watts. LED bulbs for most residential uses should be at least 60 Lumen/W.

Color temperature indicates whether your light source will emit rather “warm” or “cold” light. The lower the number, the “warmer” the color. 2700 K can be described as warm white and 5000 K may be considered cool white.

CRI measures or compares (on a scale of 0 to 100) the ability of a light source to faithfully reproduce the color of an object under artificial light. An LED bulb that accurately replicates the sunlight has a CRI of 100. Perfect CRI allows objects to appear clearly, and naturally, and colors to appear real 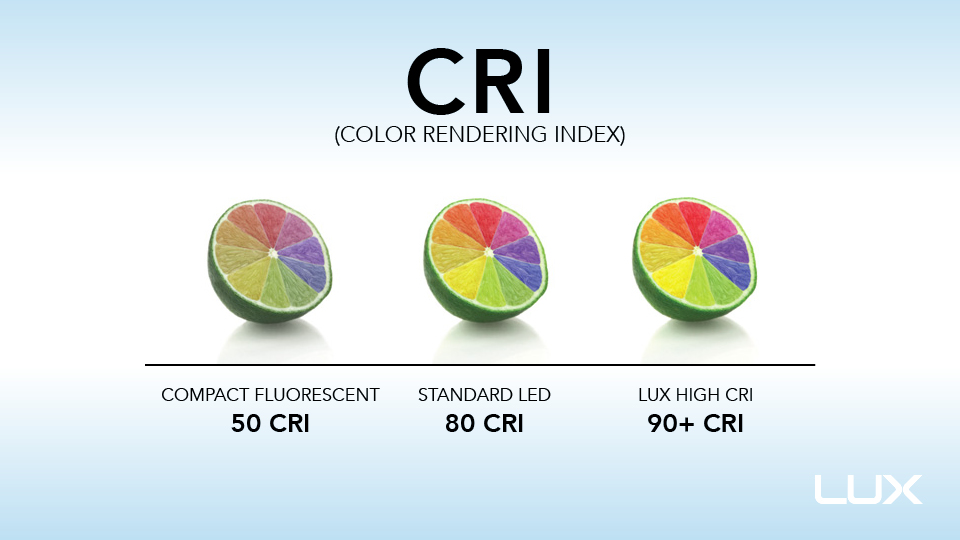 Surprisingly, halogen and incandescent bulbs, despite their awful energy efficiency, produce a full, natural and excellent light spectrum with a CRI of 100.